To be eligible for a return, your item must be unused and in the same condition that you received it. It must also be in the original packaging. To complete your return, we require order information about the purchase. Notes If the return is caused by the consumer, consumer should be responsible for the shipping fee. If due to our reasons, the goods received are damaged or not correct, the consumer is not required to bear the shipping fee for this reason. Refunds Once your return is received, we will notify you of the approval or rejection of your refund. If it’s approved, then the refund will be processed to your credit card or original method of payment, within a certain amount of days. Late or missing refunds If you haven’t received a refund yet, first check your bank account again. There is often some processing time before a refund is posted. If you’ve checked your account or contacted your bank company and you still have not received your refund, please contact our Customer service at itsomic@163.com.

FREE SHIPPING SOMiC provides free shipping on all orders in the regions available. Customers can no longer change the order details & shipping address once the product is already shipped out. Processing time: It usually takes 2 working days to process your order.(expect holidays) Shipping time: 10-15 business days (shipping times do vary due to location)

Comfortable and cute. Headphones are bigger than I thought, which is amazing for me;) Works great witch my pc and phone! Totally recommend it.

I just received my somic headset today along with the stand and mousepad and I’m insanely in love with it. Great product and great service. Arrived within 18 days to north africa. Definitely recommending !!! 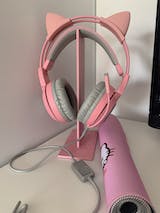 B
Benjamin Trotter
Works as expected

My wife just had to have this, it looked so adorable. Worked great with her computer and Xbox system; sound quality is excellent. Ears are removable, but I think she will keep them on. Great look, great fit, excellent value for my money.

I really wanted these headphones to work. I excitedly opened my package, immediately took a series of selfies to send to all my friends, and then went to join a party on my PS4. They worked! The bass was amaxing. The sound was crisp and clear. Footsteps were easily heard while playing Warzone. HOWEVER - The next time I went to use them, the microphone did not work. I was hesitant to leave a negative review, because my PS4 is old as hell and it may very well be an issue with my controller's audio port. I kept tying nonetheless. I eventually got around to cleaning out the port and ruled that out as an issue.THEN I FINALLY FIGURED IT OUT!!!!The secret is the MIC button! The mic MUST be set to MUTE before you plug in the hedphones. After they are plugged in, turn the mic on.I cannot speak for other consoles, but the PS4 will not recognize the microphone unless it is muted when you plug the headphones in. PS. Interestingly enough, it is not unmuting the microphone that triggers the PS4 to recognize the microphone. As soon as you plug them in, with the mic muted, the PS4 recognizes the mic. I personally thought that was strange. The mic has to be muted before you plug the headphones into the PS4. They are cute as well.

This is a really good and super cute headset! I use it for gaming on the ps4 and it works perfectly! The sound quality is good. I only knocked off one star because the headset is a bit tight around the ears and after playing for more than 4 hour, my ears start to hurt.Other than that they are perfect!

You have successfully subscribed!
This email has been registered
Close

0
Recently Viewed
Sorry, there are no products.
Top